St. Michael’s Church was built originally as a Lord of the Manor’s private chapel. It is thought to have been rebuilt in its present form between 1158 and 1189. It is constructed of local stone in the Norman and Early English styles. Until 1966 it was a Chapel of Ease belonging to St. Peter’s, Northampton (i.e. within St. Peter’s parish, and used by those living at a distance from St. Peter’s parish church). 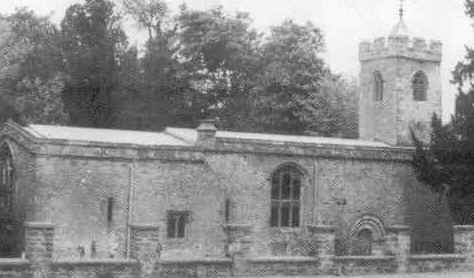 Over the South Porch is the remains of the coat of arms of the Knightley family, probably placed there when they added the porch to the church, before selling the estate to the Samwells in 1600.

The north and south doorways have three overhead stepped arches, and the priest’s doorway has a two-stepped arch. There is a mass dial at the Priest’s door east side, in the west wall and in the South Porch. Mass dials can be found on old churches to measure time. A piece of wood in the centre hole let the sun cast its shadow on to the dials to indicate when it was Mass time.

The tower has two 14th century belfry windows. At the top of the tower is the old clock. Its iron weights fall down some 40ft to operate the clock, and last a week from their high settings. The clock has only one face, which can only be read, from Upton Hall – a sign that the church was originally a family church.

Near the north doorway is a 17th century oak chest, where parish valuables and documents were stored. Near the south doorway is the 17th century Communion Table, which served as the altar here, until the present altar was installed in 1907.

The walls were scraped of their plaster and their stonework exposed during the 1893 restoration. The shallowly pitched tiebeam roofs were also installed during the restoration, and are replacements of the 15th or early 16th century ones.

In the west walls, each side of the 14th century tower arch, are two tiny openings (a quatrefoil to the south and a cross-shape to the north), through which people could look into the church from the upper floors of the two chambers each side of the tower. It is thought that such chambers had upper floors and maybe provided accommodation, when needed, for a priest or sexton.

Beneath the southern quatrefoil is a rectangular opening, which is filled with 15th century traceried woodwork – possibly from the former rood screen or maybe even made especially for it.

The church has some interesting remains of the Knightley and Samwell families. Most striking is the chest tomb of Sir Richard Knightley and his wife, Jane in the north wall of the chancel. This has been damaged, partly by its move from the right side of the altar, but possibly also by time, church restorers, or by the deliberate actions of the Cromwellian forces in the Civil War, as is believed locally. Sir Richard is shown in plate armour with his helm, while his lady is richly dressed with flowing hair.

The stained glass east window dates from a restoration of the chancel in 1850, although was not completed until 1870. It contains a representation of the Crucifixion and the Passion.

There are three recesses in the chancel walls. On the south side of the sanctuary is what was probably a piscina, (its drain has now gone) beneath a trefoil-headed arch. Beside it is a small opening, which extends through the wall. In the east wall is a rectangular aumbry (there is another in the north wall, behind the tomb), which was a cupboard for storing the Sacred Vessels.

Four diamond-shaped Hatchments hang in the western part of the nave. These coats of arms (depicting back-to-back squirrels cracking nuts: the arms of the Samwells) were displayed over the front door when a death and funeral took place, and were later placed in the church as a memorial. They commemorate: 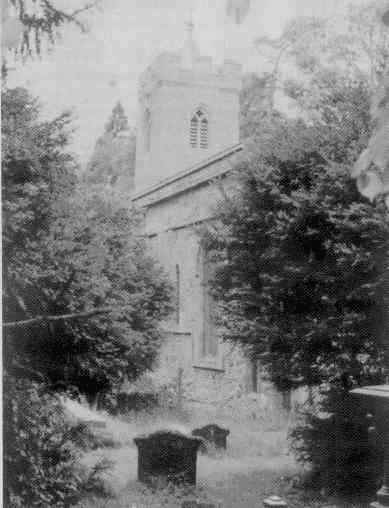 Around the church are some old and interesting graves, but as the local residents still care for and visit the graves any inspection should be undertaken with care and respect. The graveyard is also a conservation area, so the plants and wildlife should not be harmed.

St Michael’s was declared redundant a few years ago, and is now cared for by the Churches Conservation Trust. Quinton House School uses the church for occasional services for the pupils, and helps with its upkeep.

The church can be viewed by arrangement with Quinton House School during school opening hours. To arrange a visit, telephone 01604 752050.

For information about how you can help to restore and enhance this piece of our local heritage, see Friends of St Michael’s.

A History of Upton and Berrywood, by Fred Golby (Warwick Printing Company, Warwick, 1994)

Quinton House School Website
back to top
Go to top