The shrine is within an arch on the perimeter walk in St Luke’s churchyard, and is dedicated to the late Father Nigel Dent. 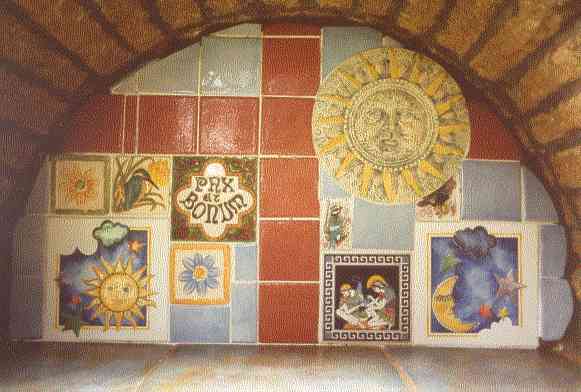 The tile panel celebrates St. Francis, St. Clare and St. Luke; Father Nigel was a member of the Third Order of St. Francis, and St. Francis is our sister church. St. Francis lived from 1182 to 1226 AD, just about the time St. Luke’s church was in its heyday and part of the Abbey of St. James, so it was thought that a panel in the medieval style would be appropriate, full of allegorical meaning.

Key to the shrine

The Cross, empty, sign of the risen Christ, blood red, for His blood shed for us.

a. Celtic Sun face from Cornwall, overlaying the Cross. St. Francis bore signs of the crucifixion stigmata at his death.

b. & c. Daisy tiles. The day’s eye, opening and closing with the daylight. Our forebears saw in its yellow disc a miniature sun with rays.
There are also ‘moon daisies’. St. Clare was nicknamed ‘Sister Moon’.

d. Pax et Bonum. A tile brought from Assisi by our own Duston pilgrims. ‘Pax’, the peace of God which passes all understanding. ‘Bonum’, blessing and moral goodness.

e. Blue Tit. St. Francis loved the birds and the flowers. An industrious little bird that can have as many as twelve young, but only one will survive the year.

f. Cuckoo. A taker, gives very little and takes much. Can also have twelve young, one in each of twelve other birds’ nests. Others will raise its young - at the cost of their own.

i. Kingfisher. ‘The Halcyon’. Here representing water and the brilliant colours of summer warmth - the halcyon days.

j. Greek tile in blue, representing St. Luke. One soldier binding another’s wounds. This tile comes from Corfu. St. Luke was a Greek - ‘The Beloved Physician’ - and also Patron Saint of artists. St. Francis spent a year’s confinement and suffered a serious illness as a prisoner of war.

The background tiles are sky blue, indicating the sky and infinity.

St. Francis was born in Assisi - Francis Bernardone - of a wealthy family. After enjoying the trappings and lifestyle of a wealthy man, he was confined for a year as a prisoner of war and suffered a serious illness.

Following these experiences, he was converted to a caring way of life. He sold all his property to give to the church and began to care for the poor. Eventually disinherited by his family, this saintly man began to attract followers. He founded the Franciscan Order (Friars Minor, Friarites, Grey friars). Soon he attracted support from the Pope.

Knowing the pitfalls, he laid down tough rules for his Order to prevent the corruption of wealth. St. Clare (1194 to 1253 AD) joined him when she was 18, and St. Francis founded a separate order of Franciscan nuns or 'Poor Clares'. St. Francis is remembered as the most blameless and gentle of all the saints, the most Christlike figure of the Middle Ages.

A series of illustrations 'The Little Flowers of St. Francis' illustrate the simplicity, the happiness and poetry of 'the little poor man', who preached to the birds and loved nature.