In the 1960s, Duston was incorporated into the Borough of Northampton which was then a designated New Town. New housing estates developed rapidly to the north and east of the village. The hundred year old St Barnabas chapel, provided for the quarrymen and constructed of corrugated iron, was well past its useful life and in the wrong place. 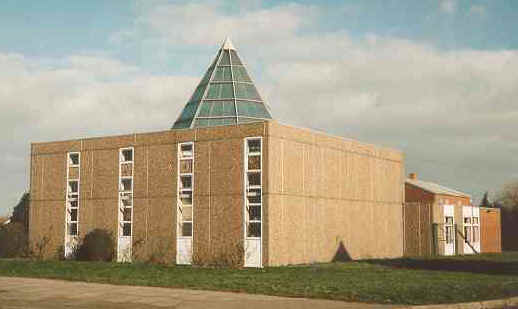 A plot of land was provided under the auspices of British Timken’s Nene Foundation and a design for a new church approved by the Diocese.

The foundation slab was laid in 1967. This was provided from St Luke’s Church, thus providing a link between the two buildings. (The slab suffered damage on the floor of the church and has been restored and moved to the entrance hall wall). Despite severe financial difficulties, following the discovery of dry rot in St Luke’s, the project went ahead. There was criticism that there were too many straight lines – square building, girders, ironwork, etc. – more curves were needed. This resulted in the architect replying that at least the lavatory seats would remain round!

Various fittings and furnishings were provided by local firms and architects including the Cornish slate panels, the stained glass windows depicting the sun, moon and stars of St Francis’ Canticle, the font, the wooden cross now on the wall but originally hung over the altar, and a beautiful silver chalice and paten. The church originally has a reconstructed pipe organ converted to electric operation but this has recently reached the end of its useful life and has been replaced with an electric keyboard connected to the sound system.

The worshipping community began with six families transferring from St Luke’s. The congregation grew steadily and the building was expanded to include a community hall, kitchen and office together with a church house. The old vestries were converted into a quiet room which was later dedicated as a chapel.

The parish was reorganised as a team ministry in 1990. Thus St Francis now has its own vicar, as opposed to the curates of the past.

As families move forward and develop, so has the family of St Francis, including the reorganisation of the furniture of the church, moving the altar ninety degrees to its current position, and more recently the upgrading of the lighting system.